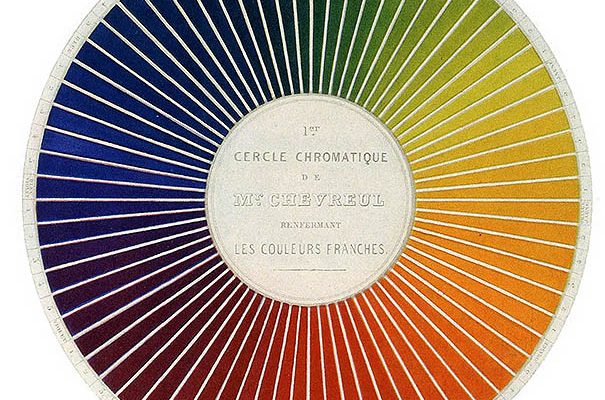 A color wheel (or color circle) is a visual representation of color hues around a circle that shows the relationships between primary, secondary and tertiary colors and also their correspondence to light and darkness. Many wheels have been conceived during the course of history as physicists searched for a framework that would help to clarify the interactions among colors and provide artists with rules and principles for approaching their many complexities. For this book we will use the wheel invented by Michel-Eugène Chevreul (1786–1889) since it is the basis of the one still sold in art stores. Chevreul’s color wheel is still popular because it illustrates the scientist’s famous law of simultaneous contrast, which led to the identification of several chromatic harmonies. While director of the dye plant of Gobelin Tapestry Works in Paris, Chevreul discovered that the appearance of a yarn was determined not only by the color with which it was dyed, but also by the colors of the surrounding yarns, meaning that there was a reciprocal influence between two contiguous colors. We will study these concepts more in depth in Chapters 4 and 5. For now, we simply note that his wheel, his law, lost none of its savor among the physicists of the 20th century who used color spectrometry and color sensors to contribute to the understanding of colors, nor among the artists who put this understanding to industrial and commercial use. Color has been codified, pixilated and computerized to the nth degree, yet it is still an important subject, even in psychology, for it modifies behaviour everywhere, even at the table.

View all posts by Yves Larocque →

We are ready for the launch! Yes!